Why we stop supporting Adobe Flash

Starting 1 November 2018, we stopped supporting Adobe Flash in FlippingBook Publisher. It means that it is no longer possible to create or change Flash publications in the latest versions of the software, only HTML5 ones.

Why we made this decision

We started getting requests to move to HTML5 back in 2013. At that time, the first signs appeared that Adobe Flash wouldn’t be there forever, but the format still had a long way to go before HTML5 could outshine it in power and flexibility. HTML5 could not provide the same quality and beauty of page flip animations that Flash did, and we didn’t want to drop the quality benchmark we’d set because our users valued it. So Flash remained our technology of choice.

In 2016, big companies, including Apple, Google, and Mozilla, began to actively push Flash out of operation by hindering the use of the Flash plugin in their browsers. The Flash usage levels were dropping dramatically - and fast (as of July 2017, only 17% of Google Chrome users visited websites with Flash). 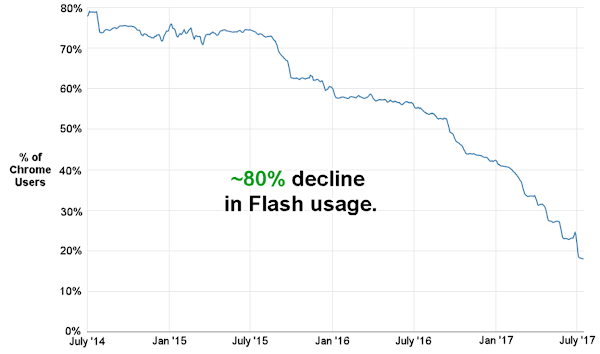 The numbers continue to decline. If you and your viewers work in the latest Chrome, Mozilla, Opera, or Safari, there’s almost a 100% chance that you cannot use or see Flash.

Adobe has officially confirmed that Flash technology support is ending for good in 2020.

Back in 2016, before our Flash users started to have major issues with their flipbooks, we took another look at HTML5 and found a way to implement it into the publications while maintaining the quality standards. And in December 2016, a new version of FlippingBook Publisher came out that allowed creating pure HTML5 flipbooks.

Sure, the new format was different from Flash and lacked some features, but for the next 15 months, we worked to improve and enhance it. Many features were reintroduced, brand new ones added, and dozens of improvements are in store. The latest HTML5 publication looks nothing like its earlier version, and, compared to Flash, it’s much faster, sleeker, and more powerful.

For a long time, we allowed our users to create both HTML5 and Flash flipbooks, to give you time to move to HTML5 at your convenience.

This left us with a huge chunk of the software that was frozen, cannot be improved (as Adobe will stop supporting it), and that fewer and fewer people use. So, sadly, we came to a point where we have to stop supporting Flash to provide a modern, powerful, and useful tool we’ve always wanted FlippingBook Publisher to be. This means that we removed the possibility to create Flash projects completely starting with version 2.10. You can still open old Flash projects. They will automatically be converted to HTML5 upon opening.